Fournier – Featured in the Wine Advocate

News from Our Producers' Vineyards and More 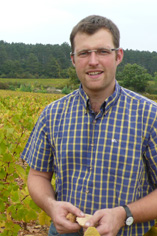 “Readers may remember that last year I sang the praises of winemaker Laurent Fournier. So it was only right that I visit his domaine in Marsannay on my next opportunity. He has a bespoke tasting room, modern and chic, unusual for Burgundy, where often I am balancing my laptop on a barrel next to layers of creeping black mold. Laurent himself was suffering a bit of a cold, which only slightly dampened his outgoing and refreshingly chatty personality. “We have just over 17-hectares although 4.5-hectares have been replanted in recent years,” he explained. “The story of the domaine begins in the first part of the 17th century with Swiss origins. My grandfather was a vigneron with other crops such as cherries and asparagus and it was my father Jean that decided to make wine and to vinify it himself from the 1965. I started working at the domaine with my father in 2001, and I’ve been alone since 2003.”

We commenced with a tasting of wines made from Aligoté Dorée. “I am a big fan of this grape variety. We do a classic aging in 600-liter barrels for 12 months. It does not have a strong character, but it explains the origin of the terroir.” Laurent told me that he prefers to use less wood nowadays.

“For the débourbage we’re trying to keep the wine the longest possible without sulphites to make it stronger  against oxidation, though if we have a bad evolution of the wine then we will add it. In 2013, we added SO2 after the first racking. I don’t like stainless steel for aging. I find that it gives the wine a cold character, so I try to finish the aging in concrete tank and I have found this better.

“We try to produce rosé … for the gastronomy. I don’t want to make a cheap and easy wine.”

Nowadays, I’m using more pièces than demi-muids because they make the wine more expressive.” Laurent also makes a nifty rosé, which, of course, Marsannay is renowned for. “We try to produce rosé without saignée to produce a wine for the gastronomy. I don’t want to make a cheap and easy wine,” he explained.

Alongside Sylvain Pataille and Bruno Clair, this domaine is one that is at the top of its game. In particular, check out his stunning expressions of Bourgogne Aligoté that will change your perception of this oft-maligned variety. Also, his Côtes de Nuits Croix Violettes Vieilles Vignes must rank as one of best I have ever tasted. Laurent has a penchant for a bit of experimentation. His P’tite Grumotte is picked the day before his harvest officially begins, when his own small team of pickers enter Les Longerois and Les Ouzeloy to  pick out just the millerandé berries. It is stunning.”