Making the Grand Cru of Sancerre 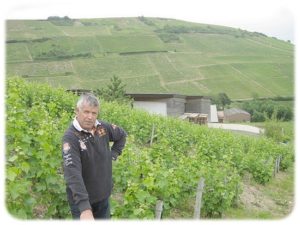 This family domaine of 9ha located in Chavignol can trace its history back to 1380. The land records for that year mention a Jean Boulay as owner of vineyards in Chavignol. At the time, the Clos de Beaujeu in Chavignol was already known for the quality of its white wine which is remarkable since Sancerre was known as a red wine area until after phylloxera. In the 14th century the Clos de Beaujeu supplied the Cathedral of Bourges with white wine. The vineyards sit high above the village which appears to be nestled in a gouged out ampitheatre with 1 road in and out.  The  vineyards slope inward to the village, the most significant such as Mont Damne,  Grand Cote, and Cul de Beaujeu marked by their various crucifixes in stone.

In general he works by instinct, “au feeling” because he wants to “let the wine live” and tries not to interfere with the natural process. “C’est la nature qui fait le vin.”

Of the 9ha owned by Gerard Boulay, 8 of the hectares are on the slopes of Chavignol on Kimmeridgian or “terre blanche” soils (actually similar to the soils in Chablis). The wines produced on “terre blanche” are some of the most distinctive and soil-inflected Sauvignon Blancs produced in the Loire, with a delineation and minerality often reminiscent of a top Chablis. Among its top ranks, including some of Boulay’s neighbors (the Cotats, Vatan, Thomas-Labaille), these are gorgeous, ageworthy wines that are a clear step above “regular” Sancerre. In Chavignol they say “A wine is first Chavignol and second Sancerres”. Gerard Boulay works the soil by hand or with a horse. The youngest vines at the domaine are 42 years old, the oldest may be near 100.  The wines ferment with no intervention. He adds no yeast and minimal amounts of SO2, and the wine is fermented in tank and undergoes a light filtration before bottling. The Clos de Beaujeu (from a vineyard of 0.75 hectares) is fermented in barrel and bottled without filtration. He described his role as one of “surveillance” to make sure nothing goes wrong. In general he works by instinct, “au feeling” because he wants to “let the wine live” and tries not to interfere with the natural process. “C’est la nature qui fait le vin”.

Sancerre Chavignol “La Cote” 2015: This long slope which partially faces north has more Kimmeridgean clay than other expositions, the wines are some of the richest in Chavignol, accompanied by the minerality and race the village is known for. 2015 was exceptional. Gerard describes this vintage as “generous and precise”

Sancerre Chavignol Monts Damne 2015:  The Mont Damne is always more tightly wound and displays an intense minerality.  The wines come from very old vines (avg 50 yrs) on one of the steepest slopes.  The wine is fermented in neutral 500 liter oak barrels on indigenous yeasts, bottled without filtration.

Sancerre Chavignol Rosé 2015: Always arriving late to the party, this Rosé is meant to be drunk a year after its harvest date.  Chavignol was a village known for its red wines before Phylloxera, so this wine is highly topical. The Pinot Noir vines are in front of the Boulay home.  He produces only about 200 cases.

La Comtesse 2015: 50+ year old  vines from the sweet spot of the Mont Damne..  The Vineyard is a dramatic visual at the end of the village marked by a lone crucifix, wind swept and high above the village.  This special selection is barrel fermented in neutral oak barrels and bottled unfiltered. 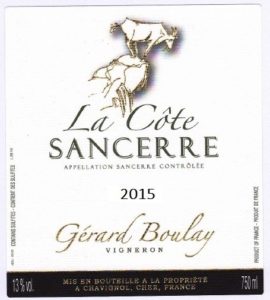 2015 was a superb vintage in Sancerre and especially for Chavignol.